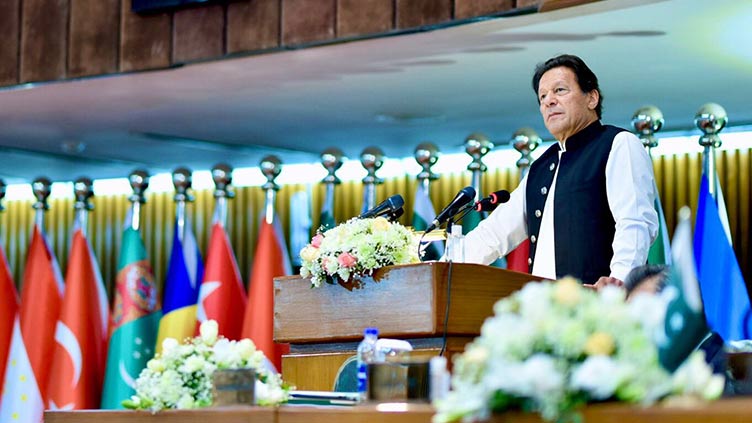 Prime Minister (PM) Imran Khan addressing the 48th session of the Organization of Islamic Community (OIC) Council in Islamabad on Tuesday, welcomed the Foreign Ministers (FM)’s to Pakistan and said that the Pakistani nation is overjoyed because all the honorable guests came to our country.

He further congratulated everyone on getting March 15 as the day of fighting Islamophobia, he also stated that this date specifically marks the date of a man walking into a Mosque in New-Zealand and killing Muslims because he thought all Muslims were terrorists.

The PM said that it has been fed to the western nations that there are different types of Islam, we as the heads of Muslim nations failed to show them that there is only one type of Islam, the religion given to us by our Prophet Muhammad (Peace be Upon Him).

While talking about the OIC’s working, Imran Khan said that there has never been a coherent response by the Muslim leaders which enhanced the Islamophobia but today I am glad that we have gotten it registered to the west that Islamophobia is a real thing. Prime Minister urged the OIC countries to take a united stand on various challenges facing the Muslim Ummah including the longstanding issues of Palestine and Kashmir.
he said the Muslim countries should not drag themselves into bloc politics and rather show their power for bringing peace in the world.

The Prime Minister regretted that the Muslim Ummah have failed to make any impact for the resolution of Kashmir and Palestine disputes. Given our divisions, the oppressors do not take us seriously. He pointed out that regardless of our huge population bulge of 1.5 billion Muslims, our voice unfortunately has not been able to stop the blatant injustices against Kashmiris and Palestinians.

Imran Khan said the UN resolutions back the right of self-determination of Kashmiri and Palestinian people.

He said the international community promised the Kashmiris to decide their future, regretting that the special status was also taken away illegally by India on 5th August 2019. He said India is also changing the demographic structure of the occupied territory in complete contravention of the fourth Geneva Convention. He said India is doing so by bringing settlers from outside.

Regarding Afghanistan, Prime Minister Imran Khan said a stable Afghan government is the only way to stop international terrorism emanate from their soil. He urged the international community to help the Afghan people in sorting out their issues